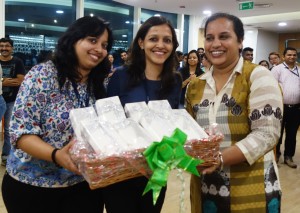 The excitement was palpable; the applause was loud; and the talent just flowed….!

Fun-takshri, was an event organised by the Fun-d-mentals team, in the West and North, to dig into the singing talent inherent in Thomas Cook and showcase it on a common platform.  And most of all, have ‘fun’ doing it! In Mumbai, the response was so overwhelming — 52 groups keen to participate — that they had to have several rounds over a whole week.  Several teams competed every day, eager to make it to the final!

Out of the 52, eventually only 8 teams were left, ready to slog it out at the finals on 21st. July. Apart from the conventional Antakshari, to make it more competitive, there were dumb-charades, and identifying the songs from short clips of music etc. It was, indeed, fun to see the teams brush up their knowledge, delving into film songs over the decades, and trying to remember the old movies.

On 21st July, everyone in Marathon Futurex, gathered in the canteen area, to cheer the Funtastic Funsters, Cracklers, Josh, Dinchak Girls, Jumanji, Fusion, Mastani and Satrangis, and watch them battle it out. The judges– Lakshmi Soni, Muzaffar Ansari and Neeraj Dev Singh were ready to hear them and choose the best..

It was a tough competition, but eventually, it was the Cracklers, with Anvayee Dalvi, Lilian Goes and Kashmira Shastri,  that emerged as the Winners. All who participated were also presented with a token of appreciation, including the judges!

The winning team won a 2 nights/3 days stay in Shimla, and deserved it too!

But most of all, everyone DID have a ‘Fun’ time!  Thank you Fun-d-mentals!