When United Airlines invited Thomas Cook Business Travel to participate in their inaugural  Cricket Challenger 2017 match,  our boys rose to the occasion with confidence and an air of excitement. The tournament was held at the Western Cricket Ground in Lower Parel on 8th April 2017. 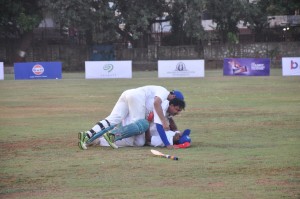 There were 3 teams who each had to play 2 matches  to compete for this year’s United Corporate trophy.

The rules were: : There were 7 Players and  7 overs each side. One Bowler could bowl maximum 2 overs and scoring above 30 was declared as retired!

The first match pitted us against Cox & Kings. They won the toss made us  bat first. Despite the hot weather our batsman managed to score a cool 63 runs in 7 overs.  Vishal Jadhav scored 20 and  Prasad Narvekar was 2nd best with 15 runs. The excitement  mounted when  Cox & Kings needed 10 runs from the last two bowls.

Their tail ender batsman hit a 6 off the 2nd last bowl giving them hopes of hitting a  4 on the last bowl to win. Vishal, showing nerves of steel, succeeded in conceding only 1 run from that last bowl.

Phew! That was close……Thomas Cook won that one by 3 runs! 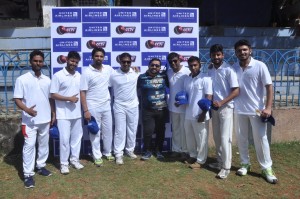 The 2nd match was  between Cox & Kings and our  own SOTC team. where SOTC,  batting first managed to score 62 runs. In response,  C&K scored merely 45 runs enabling SOTC to win an extra bonus point as they restricted the rivals to below the run rate.

Consequently,  our own colleagues were also our opponents competing with us in the Finals!  It was a tough game as SOTC was at its best in the  fielding and  batting department.

Thomas Cook once again lost the toss, but were put in to chase this time. A brilliant bowling performance from Vishal Jadhav, Manoj Agarwal and Sharang Kamat who picked the key wicket of their opening batsman, and you had to watch the wonderful ‘Jonty’ style of fielding by Bryan Tuscano, Sunil Shetty and Clarence Lobo, which restricted SOTC’s score to 59 runs in 7 overs.

The target seemed achievable, and our strategy worked as Vishal and Manoj managed a strong 2nd wicket partnership by scoring 50 runs. Both kept the run rate going. Manoj also lofted a huge six to long off in the 6th over.

However it wasn’t over yet. The thrill started in the last over where we needed 5 runs off 6 balls! We somehow managed to score singles and the deciding moment went up to the last ball where we had to score 2 runs in 1 ball to lift the trophy.

Vishal, who was set and in good form, managed to tickle the ball towards square leg. The fielder fumbled big time and couldn’t hold us from taking  those winning runs.

What a nail-biting finish! Thomas Cook emerged victorious and triumphant and everyone agreed they had a fun time throughout the tournament.

Thank you United Airlines for making it happen!