When you give gifts, you are giving something willingly without wanting something in return. Making someone feel special is more than enough reason to make you give more. It tells the receiver that you were thinking about them. While it feels good to be on the receiving end, there’s a feeling of fulfillment when you are the one who is doing the giving. This can’t be measured by monetary value. Knowing this to be true, Thomas Cook India ‘planted’ the Tree of Giving in the office, where each one could be someone else’s Santa Claus. 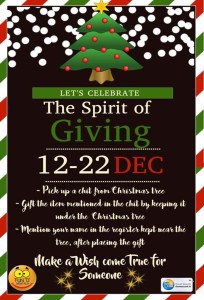 The rules were simple –

The gifts were given to underprivileged children being treated at Bai Jerbai Wadia Hospital For Children in Parel.

Christmas this year was filled with fun and joy! From lit up trees to twinkling fairy lights, from snowy decoration to tinsel all over – the Marathon Futurex office dazzled with the spirit of Christmas.

The service quality team comprising of Nawazesh Irani, Nirmala Rajagopal, Prakash Thakur, Supriya D’Silva, Shailee Mehta, Pramila Rosario, Riddima Tamang, Mitesh Gohil and Blyton Dias accompanied the HR team to Bai Jerbai Wadia Hospital For Children in Parel, and surprised the children with Christmas presents like crayons, coloring books and other goodies. Besides that, the team also spent time with them. The Children were delighted with this unexpected treat.

No Christmas spangles  or lights could  match the brightness on the faces of those little ones who got a gift this year, which in turn created a warm glow in the hearts of those who made it happen.

A great and noble initiative by the HR department which was enthusiastically followed by everyone!