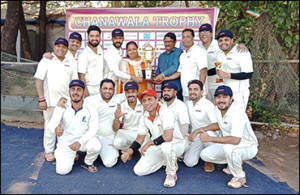 The SOTC Travel Ltd cricket team entered the Finals of the Channawalla Trophy after beating TIFR in the last match by 50 runs. The finals were played against FINORION Pharma, at the famous Parsi Cyclist wicket in Azad Maidan.

Captain Riyaz Shaikh ( PMT) won the Toss and, despite a wet wicket, decided to bat. This time SOTC promoted all-rounder Arun Sharma from our Legal dept to open the innings with Salmaan Mistry ( B2C Sales). Both the Openers were confident and provided a rocking start as they scored 56 runs in 07 overs before Salmaan got bowled. Vice-Captain Rahil Shaikh (PMT) stepped in to bat. Rahil continued and scored another half century. With a few majestic ground shots, some hard hitting boundaries coupled with some brilliant running between the wickets, both Rahil and Arun put up a superb partnership of 134 runs in a mere 15 overs. Rahil lost his wicket scoring 61 runs. Captain Riyaz Shaikh walked into the crease. He scored 23 runs and with Arun made a partnership of 51 runs. Our young wicket keeper Sachin Sawant ( MICE TEAM ) joined Arun and added individually 37 runs. Arun was out on 87. Later Chetan Jadhav ( PMT ) Rajesh Pednekar ( Finance ) and Gaurav Pai (PMT Domestic) put an end to the innings taking the score to the highest in the tournament —  318 runs in 38 overs. The opponents were completely mesmerized with SOTC’S batting performance so much so that they fell short of time and couldn’t bowl the stipulated 40 overs. They were penalized which resulted in an additional 10 runs per over as penalty! Finorion Pharma now had to chase a 339 run target in 40 overs.

Abhishek Jagtap (MICE Team) knocked off the opener’s stumps in the first over and Rohit Pandey (Marketing) dispatched the other opener in the second over. The Opponents soon managed to build their innings and started attacking our pacers. For the third wicket, the batsmen meticulously added 83 runs with that partnership. While it appeared that the batsmen were now set and would trouble SOTC, Abhishek Jagtap with a brilliant throw had the batsmen run out. It was time for the tweakers to roll their fingers. Arun broke the partnership in the 19th over and followed that with a spectacular Hat-Trick. Rahil with his deceptive flight and guile took 2 wickets in back to back overs, and both the spinners bundled out the opposition in 122 runs. Rahil Shaikh won the Most Valuable Player of the Tournament, and the Man of the Match was awarded to Arun Sharma. Heartiest Congratulations to the SOTC Cricket Team (Capt Riyaz and entire Team) for winning The Channawalla Trophy.