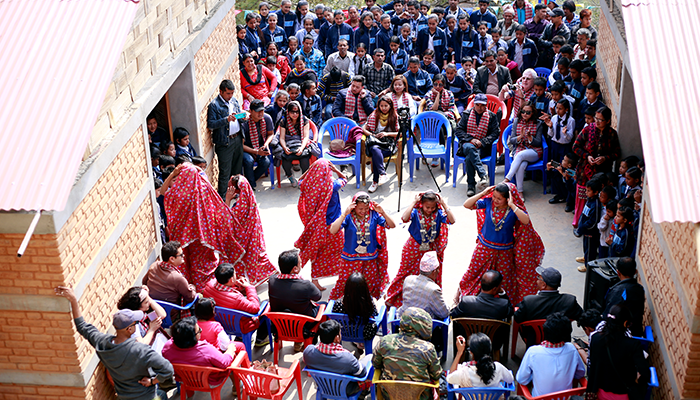 One year down the line, Sita is happy to announce that the Nepal Relief Project has been completed. The company worked  tirelessly with Abari, a socially oriented research, design and construction firm based in Nepal to rebuild a classroom block at Saraswati Secondary School at Dhulikhel as a part of its CSR Project using the Nepal Relief Fund that was generously donated by our colleagues, partners and family to support the people affected by the devastating earthquake on  25th April, 2015.

Sita journeyed with Abari every step of the way, from the bamboo truss for both classrooms being put up, to the lime plaster process; to soling and concrete filling of the floor; to bamboo cut pieces and preparatory work for metal brackets for the roof truss; to classrooms rooftops being put up. It has been a journey of knowledge and understanding. It has given us a deeper meaning to sustainability.  Most important, the new classroom block is earthquake resistant.

The big day came on 26th February, 2017 when the classroom block was officially handed over to the school authorities in a ceremony at the School. The School children were treated to cake and a rare musical program where the Sita Nepal Team members performed to entertain the children! The new classroom block keys were handed over by GM- Marketing Communications & CSR to the principal of the School in presence of the Executive Committee Members of the School, the children and Abari and Sita team members. The inauguration ceremony ended with lunch, which was cooked on site – sustainability at its best!