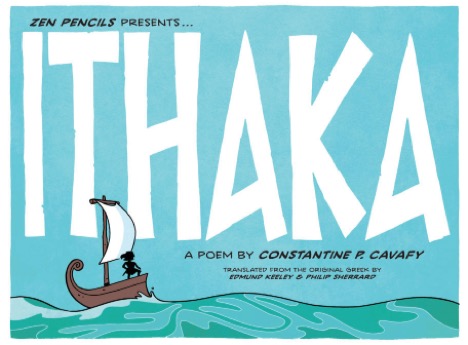 On November 27th 2019, Thomas Cook had signed a landmark deal  to buy 24% stake in Ithaka. This was the first investment by an industry giant in the travel tech space, and since then the travel startup scene has been transformed with many more investments happening, buoyed by the confidence this generated in the market.  In the past few months, Ithaka has been doing really well.  But it hasn’t been easy! We asked Rahul Singh, CEO and Co-Founder,  to tell us about the journey so far.  Here is an interesting update in his own words. It is a story of enthusiasm, perseverance and courage.

“Ithaka, the company, is a real world manifestation of the message delivered by  the poem “Ithaka”, a masterpiece by the Egyptian poet Constantine Cavafy.  He spoke of the importance of enjoying the trip, any trip, and not longing for a journey’s end.  It is a metaphor that can be extended to many of life’s processes.

The poem charts the journey of the Greek mythological character Odysseus who, on the insistence of his father, sails on a journey from Troy to Ithaka in the hunt for life’s treasure. On this voyage he fights monsters, falls in love, becomes rich, has a baby and grows old. By the time he reaches Ithaka, the legendary Greek island, he has gained all of life’s treasures.

Inspired by this poem I, and my best friend from college Ameya, started Ithaka.

It aptly symbolised  our objective  : To make the journey much more exquisite than any arrival at a final destination!

Our startup journey is quite interesting. We didn’t begin with what we are doing now. Our inspiration was derived from our own travels. We saw there was a specific need for discovering things to do and booking it online, especially in South East Asia.

To validate it, we did a pilot run in Bangkok to see if people were interested and it came back positive. So we went about creating the first prototype: a mobile website for booking things to do, and launched it in the market. This is what the first product looked like:

And here’s a memory from the first booking we did: a traditional Thai massage in Bangkok for just 100 Thai Baht! The people in the picture are (from L to R) Ameya, our Thai partner and our 1st customer. 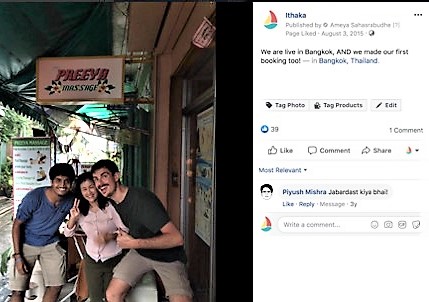 Things didn’t however go according to plan. We tried to sell to travellers on the ground but we didn’t see many purchasing the experiences. Nonetheless, they constantly kept asking for travel advice which made us think that if people are asking for it, why not  give it to them? So we added a chat widget to the website. Interestingly, we started seeing bookings as we helped more travellers on the chat. There’s an inherent trust that builds when you talk to someone, and that convinced us that there was potential for a big business in this.

So we pivoted with the first version Ithaka today:  trip planning on chat. It looked just like WhatsApp, except that it was pink in colour, and Ameya and I were the travel experts helping people plan kickass trips to Thailand!  We spent 2 months validating whether this would actually work, and if we could scale. By November 2015 we were pretty sold on building this, so we started looking for someone who could come in and lead our technology (both Ameya and I were from business backgrounds, and needed someone to build the product).

If I were to specify the single most important event in Ithaka’s story, it would be when Mith (Mithilesh Said) joined Ameya and myself, and took over Ithaka’s tech.

A wizard technology architect, Mith has taken Ithaka from being a platform with just a few hundred chat messages to over 6 million messages now exchanged on Ithaka. But more on that later.  Here’s a glimpse of the team at Christmas 2015. Mith is 2nd from right, then me and then Ameya. We also had 2 travel experts in the team who were helping people plan trips.

In 2016, we wanted to move forward, but  for that we had to grow to a few hundred users first. We  spent zero money on getting there. We spammed Facebook groups where travellers were already discussing questions around their trips, and we wrote heavily on Quora to gain our first customers.

Slowly we managed to get to a stage where we were getting 1,000+ travelers a month. We also raised our first funding from a group of angels in mid 2016, and took our first office (we were working in co-working spaces before that). An exciting achievement.

By the end of 2017 we had launched our 2nd destination– Bali — and scaled the platform to 2,000 travellers a month. The biggest achievement though, was our product which helped reduce the time required to plan a trip from 4 hours in early 2016 to just 90 minutes. We had 10 travel experts now.

While it was pretty exciting for the most part, by the end of 2017 we had started stagnating as the model of in-house travel experts was difficult to scale.

We had also gone through a lot, personally.  First time founders learnings are very hard to adapt to and the mental load of growing the business while looking for further funding (and getting continuous rejection from VCs) had taken a toll on us. 100-hour weeks were bound to have its impact, and eventually Ameya decided to move on from Ithaka in quest of a life of travel. 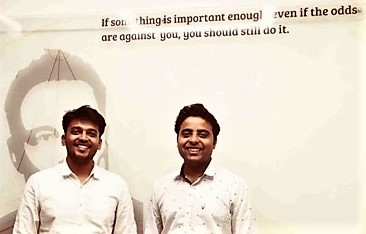 I and Mith evaluated our options and felt that we had unfinished business here, and this was not something we could just let go of. So we decided to carry on, and I took over as CEO. Here’s the two of us smiling bravely in the face of endless adversity! 🙂

This was when the 2nd most important event happened in Ithaka’s story. We always knew that to scale Ithaka we had to move away from the in-house experts model. One obvious thing we always observed was that when planning a trip abroad, the first person anyone reaches out to is a friend who has been there.

We thought that if people are doing it for free for their friends, would they do it on a platform for strangers in exchange for some kind of reward? So we launched the community driven planning initiative with 3 “Community Experts” who were our own old travellers. The short form was CEx. Yep.

This is what the first product for the Community looked like from early 2018. It was a desktop interface. 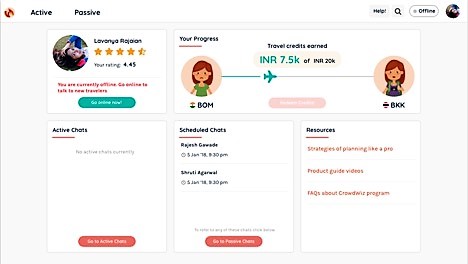 Initial trials of the community program were great, and by April 2018 we were convinced this would work. We were getting these experts to plan a trip for others and earn “travel credits” on Ithaka. They could redeem these credits in travel bookings and fund their own trip. And it was working! We saw a lot of interest in the program and travelers were having a great experience as well.

This is around the same time we got a very intriguing e-mail from Thomas Cook India about a potential “collaboration”.

Funny story, the email was sent out by an intern (Avinash) from Ankur Roy’s team. The intern had reached out to a senior of his from college who used to work at Ithaka. That senior thought that Avinash was looking for a job, so he gave him our careers e-mail address! It took me days to notice that e-mail but I am super glad that I finally responded to it! 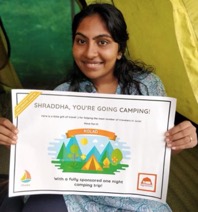 While we were in conversation for this landmark funding, Ithaka went from strength to strength. We rebranded the “Community Experts” to “Travel Influencers”,  and built out a mobile platform to grow faster. We gained over 20 Influencers and were able to sustain 30-40% of the traffic we were getting completely on Influencers. Here’s a picture of one of our earliest Influencers (who is also one of the most successful ones on the platform) with her Influencer of the month award.

On November 27th, 2019 we signed the landmark deal for Thomas Cook to buy 24% stake in Ithaka. This was the first investment by an industry giant in the travel tech space, and since then the travel startup scene has transformed with many more investments happening, buoyed by the confidence this generated in the market.

Guided by the stellar people at Thomas Cook, we are now ready to embark on the next stage of our growth. We have already grown 5x since the investment happened, and are looking to launch 50 new destinations by the end of this year.

We are collaborating on essential services like Forex and Visa (we ask our travellers to purchase these services via Thomas Cook, creating value on both sides). We are also very close to integrating Thomas Cook’s hotel inventory into our app. This will be a true testament to the collaboration possibilities between the two companies, and we hope to explore these synergies a lot more this year with some exciting projects lined up.

The Ithaka Product and way forward

Here’s the gist of the Ithaka traveler product and how it helps travellers:

There is no good travel product for the researching millennial out there. This generation loves to research, explore and get information off the internet. They don’t want to book packages and don’t want to go down the regular path. I am not talking about backpackers here. I am talking about the regular city dweller Indian millennial who has enough disposable income, and an urge to explore the world.

This is a supremely chaotic process where a lot of thoughts, ideas and plans get lost in the noise. And there is no central point where they can consolidate all their research, get inspired for taking the next trip, plan it, track it, revisit it and reuse the data into the next trip. They also want a platform that empowers them to travel more.

There is a need for one product to be the anchor app of their trip. Ithaka is trying to do just that and defining what the next generation of travel looks like, and this is the enthusiastic team building it:

For a short video for a glimpse behind the scenes at Ithaka, head to: https://youtu.be/Q2zqjV8cFJU

“As you set out for Ithaka/ hope your road is a long one,/ full of adventure, full of discovery.”

For us and our whole team it has been a journey full of discovery and adventure… and continues to be so!”