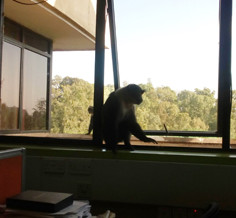 What makes Christmas Holiday season so special? Maybe it’s because it’s the longest holiday of the year or maybe because it’s a magical season when family and friends come together to celebrate the successes achieved so far. There could be a million reasons for the same but whatever the reason, people actually celebrate in various styles.  By the way, how was yours? How did you celebrate?

One morning during the month of December 2017, Joseph arrived at the office earlier than the stipulated time since the mood at Christmas is to try and do things early,  finish and head back home early.  It was during this particular morning that he received his magical wish-come-true moment from Father Christmas himself! Imagine having a handful of unusual guests jumping out of nowhere just to give you a visit at your place of work! 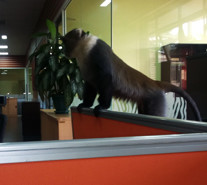 While Joseph is very passionate about travel,  he has wildlife and photography closer to his heart ,and he always sits next to the window whenever he is working. One would think the latter gave him the best chance to interact with these unexpected guests from the bush but looking at the season, this was his day, it was surely his moment and he seized it. We would say he was very lucky and are looking forward to being there as he indulges himself in future events such as these!